Cats VS Cucumbers – The #1 Scary Truth About Cats Vs. Cucumbers 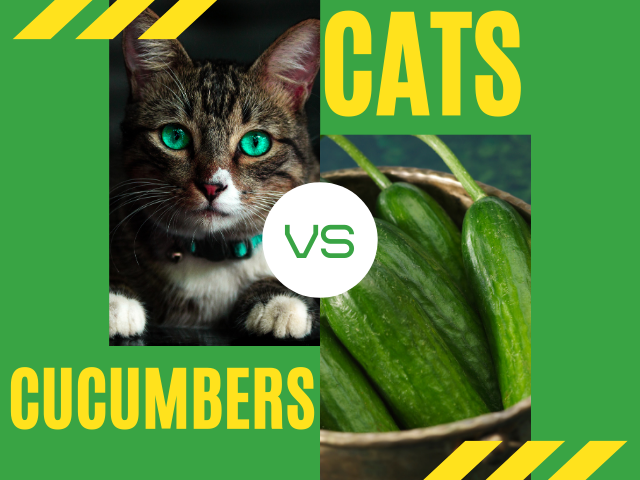 Why do cats vs cucumbers videos take a huge chunk of the 25 billion views of cat videos on YouTube? Why are there so many videos with cats and cucumbers in the first place? Is there some kind of relationship between cats and cucumbers? Or do just people like to associate random vegetables to their pets as a kind of fun!

Cats & The Internet: The Numbers Of Cats Vs. Cucumbers Videos Are Higher Than You Expected!

Before we discuss cats vs cucumbers, let’s first ask ourselves why cats are so popular online to the point that they were once called “the lords of the internet”? The YouTube-cats relationship goes back to the site’s foundation date in 2005, where Steve Chen (YouTube co-founder) was the first to post a cat video on YouTube.

And by the way, what are cats vs cucumbers? Where did that last topic come from!

Cats Vs. Cucumbers: The Origin Of The Well-Known Feline Harassment Videos

Before becoming viral, the cats vs cucumbers phenomenon came first as a sub-branch of brank videos in 2015. Also, on the 10th of May of the same year, YouTuber Doki Doki uploaded footage of him trying to scare his cat with a piece of cucumber. Six months later, the video gets 2.2 million views and 110 comments.

Since it was 2015, the news didn’t take long to spread. People made GIFs of horrifying cats and cucumber and shared it across all social media. Cats owners were scaring their kitties with cucumbers; kitties don’t take a while to jump frightening. This kind of pet behavior monitoring becomes a casual thing with time, and people get used to scaring kitties online for fun. But is it, is it really entertaining?!

“I love cats because I enjoy my home; and little by little, they become its visible soul.” –Jean Cocteau

Although cats are famously-known by being meat-eaters, adding reasonable amounts of vegetable matter in their daily diet isn’t bad. But not at all scenarios.

Why Cats Are Afraid Of Cucumbers In The First Place? The Snake Theory

Experts have tried to solve the cats vs cucumbers riddle for a long time, and the snake theory is the best that they have come of. Every creature is genetically hard-wired towards averting certain dangerous adversaries.

Unlike what Egyptian history is continuously trying to depict us, there is no world where you can find black snake and cats hanging together casually. Cats are afraid of them to the point that they unconsciously avoid any snake-like object or food (duh! Cucumbers, summer squash, zucchini, and so on).

Cats Vs. Cucumbers: Other Theories

Another theory says that what droves cats nuts isn’t the cucumber in itself, but rather its sudden appearance. That could be understandable since we, as humans, develop startled responses against unfamiliar objects behind us.

So, when you put cucumbers behind your feline friend, this triggers natural animal defensive mechanisms that sound a lot like the ones that you have when watching a ghost figure that walks towards a person in a horror movie.

Many theories have arisen since the cats vs cucumbers thing go viral. Mainly, there isn’t a clear explanation of the phenomenon, but most experts think that it has something to do with cats-vegetables shaken relationship.

Is Cucumbers Dangerous For Your Kitty?

From snake plants, chicken bones, Aloe plants, to garlic, the list of dangerous things to cats is growing yearly non-stop, and cucumbers have officially made a seat for themselves in it.

Nevertheless, cucumbers danger to cats reaches an alarming level only when you eat the vegetable (that doesn’t mean the casual cucumber pranks are allowed. There are emotional risks which we will cover within a moment).

Household-roaming felines with free access to the kitchen are the most likely to suffer from skin irritations, especially itching and blistering around the gums and mouse. Like similar vegetables, cucumber has effects on your kitty’s gastrointestinal system. Your cat might start vomiting immediately after nibbling cucumber.

However, these fur-covered creatures are selective by nature. These obligate omnivore creatures choose their dining materials guardedly, so it’s hard to imagine a cat that willingly chunks cucumbers.

The Hidden Dangers Behind The Cats VS Cucumbers Game

It’s not a wise thing to scare your pet. And according to recent studies, it’s not a healthy thing too. When you place cucumbers near your cat lodging or its food, you risk your feline friend’s safety feeling. Can you imagine your cat waking up at 3 a.m. from a snake attack nightmare? If not, stop the whole cats vs. cucumbers thing.

Final Thoughts On Cats Vs. Cucumbers!

It doesn’t matter if you like what you see or find it funny or even amusing for your boredom periods in your life. Scaring your cat with cucumbers is not a good thing, and it can affect your cat negatively.

Pranks such as these cats vs cucumbers are bad for your cat’s health “psychological health,” after all, it is not okay to scare your family and friend just to have fun! So, keep your cat healthy and happy and play with your cat to have mutual fun.

Finally, I hope you found this article useful and informative about cats vs cucumbers.

Let me know your answer down below. Do you have more information about this topic?

?? Enjoyed Reading This Article About Cats Vs. Cucumbers?