Will Cats Kill Chickens? The #1 Fact You Need To Know! 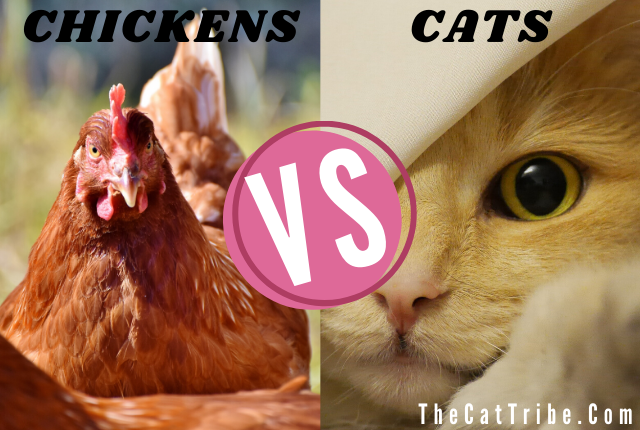 If animals are your “Thing!” Then, I am sure the question, “will cats kill chickens?” isn’t a strange debate for you.

I presume that you might be a person who is worried your cat might attacking your neighbor’s hen. Or you might be worrying that your chicken might end up in the hand of some hungry cat.

Or is it maybe you got into an argument with a friend and want to know for sure “will cats kill chickens?”, either case, we got you covered with today’s article.

Cats are carnivorous predators, and it’s fair to wonder if your neighbor’s cat or a stray cat will jump over your fence and strike your laying chickens. But are cats truly this dangerous?

According to experts, cats are known as domestic species of small carnivorous mammals, but science isn’t the judge in today’s court.

However, don’t let that cute photo above fool you. Cats are widely known to have an ominous reputation, one led by old stories about cats being responsible for horrific crimes.

Crimes such as “Serial Killer, who claimed that his cat instructed him to kill people.” Or also known as (Son Of Sam), or others like “Cats sucking the souls out of children.”

“Cats do care. For example, they know instinctively what time we have to be at work in the morning and they wake us up twenty minutes before the alarm goes off.” –Michael Nelson

Maybe you think such stories might be sufficient to answer today’s question, “Will cats kill chickens?” But, hold your breath for a second, your hen is safe. For NOW!

If we could get back to our fellow scientists – for a bit – we notice even they couldn’t get their mind wrapped up to one decision regarding the status of cats domesticity.

Another scene of the aggressiveness is when you see a fight between cats and their equals, which might lead people to think that this aggressiveness is sufficient to answer the question, “Will cats kill Chickens?” with a big YES!

However, assuming this is the only way to answer this question can be misleading and taking only one side of this crime conspiracy.

Now, shall we have a look at the other party for this debate whose wool looks colorful like a teenager on her way to the prom?

Our “assumed” victim is a type of domesticated fowl, a subspecies of the red jungle fowl. Statistics put them as one of the most widespread domestic animals.

Also, more specific statistics put their numbers to be 23.7 billion in 2018, a number that’s high enough to be walking free out of the “custody house” fully exposed to the danger of the “mighty soul taker,” a number that puts us on hold, rethinking again and asking “Will cats kill chickens?” So, Will They!

Will Cats Kill Chickens? What If Size Was The Answer You Are Missing!

For someone who owns a farm with chickens around and cats walking freely nearby, there will always be a dead chicken, and eventually a list of “What killed my chicken?” Will be made, cats often get the top spot on such list quickly, is it fair and deserved?

We can’t answer such a question without knowing the particular incident. But, in most cases, for domestic animals that considered by many “highly smart” cats tend to go away from troubles with big chickens rather than engaging in them. After all, they are too smart to know when a fight is fated to be lost.

However, little chicks might be a totally different case subject. Eventually, cats might develop changes in heart, and evil intentions might be growing. But, will it lead to killing, though?

We conclude that cats will avoid an unnecessary fight with big chickens even though there is still a risk for a cat to attack little chicks, cats remain innocent regarding our today’s topic.

Therefore, untill now, the question remains without a clear answer, “Will Cats Kill Chickens?” Another essential point to pay attention to is cats’ motives to kill chickens or any other animal. Therefore we will discuss next the psychological guide to the cat’s motives for killing.

Wars, slavery, racism, economic elimination, and many other types are different types of conflicts (some are new, and some are old) with so many discussed reasons behind that. Yet, humans seem to be the only mutual factor of such conflicts.

Nevertheless, humans keep putting animals in cages cause “they are dangerous!”

The political point of view is not what we planned for this article. However, a point had to be made that, unlike humans, animals reveal a killing instinct inside of them for three, and, only three reasons, defense, shelter, or, more importantly, food.

But, cats don’t share mutual meal options with chickens, neither the two live in the same environment (cats might share a bed with you, while, chickens live in their chicken coop).

All the directions lead us to think that “defense” is the only motive for cats to kill chickens.

Yet again, defense against what? Both are domestically kind animals that are capable of sharing the same environment.

Let’s Settle This Debate Once And For All! Will Cats Kill Chickens?

To answer the question, “will cats kill chickens?” once and for all, cats will not attack without one of the reasons mentioned earlier.

The only possible way for a cat to attack your hen house is when it has an eye on the small chicks while feeling hungry. Also, because the size is small, that might trigger the cat’s instinct to hunt, which is a normal thing, and we can’t “fix” it.

Therefore, there is no need to be scared that cats will attack grown chickens, but precautions must be taken if you have small chicks roaming around.

Again, while we don’t have a clear answer to why cats might attack your chickens, here are some guidelines to be established, and a few precautions we think necessarily should be made.

Finally, I hope you found this article useful and informative enough to answer the question of will cats kill chickens.

Let me know your answer down below. Do you have more information about this cats and chickens topic?

?? Enjoyed Reading This Article About The Question “Will Cats Kill Chickens”?