Why Do Cats Chatter? 17 Amazing Reasons Why Your Cat Makes Such Strange Noises 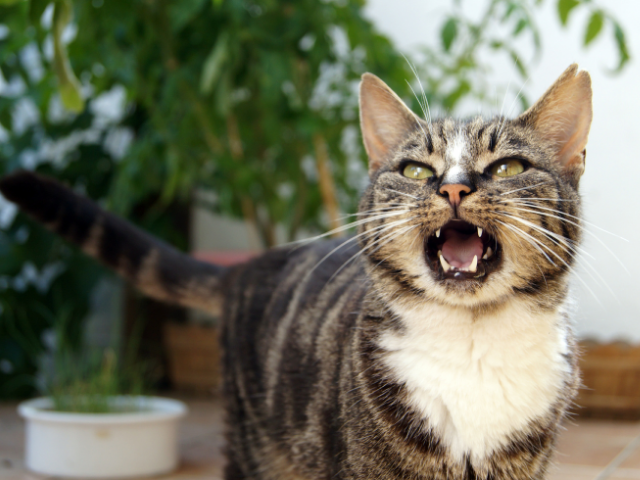 If you have been a cat parent for enough time, you may ask yourself, “why do cats chatter?” Yes, you may hear different sounds and noises coming from your cats. But why do cats chatter? In today’s post, you’ll learn all about this quirky yet adorable noise your cat makes.

Of course, those sounds that your cat makes while taking a sunbath, staring out of the window, playing inside the house, or even if it is outside. These noises may be a mystery or something difficult to explain.

However, today in our article, we will talk about the chatter of cats, so focus your attention on this article to lift your confusion.

Why Do Cats Chatter?

Have you caught your cat staring out of your house window while chattering? If so, your cat’s presumably been watching squirrels, birds, or other animals.
It’s believed cats make these weird noises out of anger and frustration after they see their prey, and not being able to stalk and chase defies a cat’s natural hunting instincts. Or, You could look at it as a kitty swear word!

Another theory roaming the internet is that a cat’s chattering is directed at the prey. It’s as if your cat is trying to mimic its squawks or shrieks. Your cat is stimulated by seeing the prey, and an adrenaline rush activates your cat’s hunting instinct. This is entirely normal, and you may also notice her tail swishing and mouth quivering.

Although mimicking is associated with birds such as parrots, studies have found wild cats are also capable of altering their vocal range. This just goes to reveal the clever and cunning tricks felines can conduct. As feral cats need frequent meals to survive in the wild, this is a fantastic feature to have.

Now, you may ask, Is this normal, or is there something wrong? This chatter appears in many forms and has several explanations, namely:

#1 Your Cat Is Frustrated

Although your cat is a domestic cat, this does not prevent it from feeling upset and frustrated if it cannot catch a bird and enjoy it as a delicious meal.

Hunting birds is an instinct of every cat, so its inability to hunt will make it chatter, expressing frustration. The cat opens and closes its mouth rapidly, producing a series of short sounds interspersed with short pauses of silence.

If your frustrated cat’s chatter increases, try to change its mood and play with her or brush your cat’s her, and to keep it away from the influence of the outer medium on it, you can close the curtains.

#2 Your Cat Tries To Mimic Its Prey

Perhaps this applies to feral cats. However, it may also apply to domestic cats. Your cat may try to mimic the sound of its prey, making sounds similar to those of prey as a hunting technique, which may be an important reason why cats chatter.

#3 Your Cat Is Excited

If you talk to your cat and tell it about its favorite game of feathers, you will notice its chatter, making nice sounds as if it is chirping, and this indicates that it is exhilarating to play with you.

Also, when you play with your cat with the lather light, notice how it chases after trying to catch this red spot, and it chatters while playing, expressing its excitement. So one of the reasons which tell you why do cats chatter is because they are excited. In addition to its chatter, your cat’s excitement appears on its body, so you see it standing confidently with its tail high.

#4 Your Cat Is Feeling Of Pain

It is one of the most important reasons why do cats chatter, where cats will make loud and weird sounds and chatter if they are in pain, such as toothaches, urinary tract infections, fractures, or digestive disorders.

You can notice this problem if your cat is not eating and drinking, is suffering from weight loss, acting as if it has no power, or has a foul mouth smell, and if your cat has a broken bone, you will notice that it is limping. If these symptoms appear on your cat, you should seek the help of a vet and get decent treatment.

#5 Your Cat Is Chattering At You

You may be looking for a reason why do cats chatter at you, making noises such as chirping or tweeting. Your cat may be chattering like this, asking for food, playing with it, feeling cold, or going for a walk. This means that your cat is chattering just to get attention from you.

#6 Your Cat Makes Noises To Other Cats

It is another reason explains why do cats chatter. Your cat might be chattering to neighboring cats on the street or cats of neighboring owners, alerting them to the presence of food or something outside.

You know that cats only meow, but did you know that the meow has different types, and each type has its own meaning? If your cat’s meow is short, this means that it wants to play with you, and the long meow that your cat makes indicates that it needs to ask for something essential and urgent such as eating. If your cat’s meow is fast, this indicates that it is scolding you for something.

When your cat sees something around it, such as a prey, the adrenaline that is pumped while preparing to hunt this prey will cause that chatter sound, but when it pounces on the target, it will be noiseless.

#9 Your Cat Chatters At A Fly Or Bug

It is another reason explains why do cats chatter. You may hear your cat make a strange sound in the house, and if you observe it, you will find it staring at the ceiling or wall.  This is due to the presence of a fly or a bug, and it is waiting for the opportunity to pounce on this small prey and kill it; It chatters, expressing its desire to catch it. And this is what it does if it discovers that there is a mouse in the house.

#10 Your Cat Is Getting Old

You may not have realized that your pampered cat has grown old. You are happy with the presence of this cute creature in your house, and you do not realize that age is passing by as well. Whereas if you notice that your cat is chattering more than usual, especially at night, this condition is accompanied often by age.

#11 Your Cat’s Chatter Is Similar To Hissing

Cats’ sense of danger and threat from the presence of a dog is an important reason why do cats chatter. The presence of a dog in the vicinity or with one of the owners near you may cause your cat’s chatter, making it feel disturbed, in addition to physical signs that appear on it such as a swollen tail, arched back, open mouth, as well as fangs ready for confrontation. In this case, try to intervene and keep your cat away from this threat.

#12 Your Cat Chatters Outside Loudly

Your cat may make this sound as a warning to other cats before starting a fight with them. It is an apparent reason why do cats chatter loudly, as they resort to this sound as a means of defense before beginning an attack.  This loud sound is o accompanied by bare teeth and hissing. If you hear your cat chattering in this way, it is best to step in and catch her before it gets into a fight with other cats.

The majority of cats tend to chatter, and there are types of cats that chatter more than others, such as shorthaired cats. So if you are looking for a cat that tends to be calm rather than chatter, you can search for cat breeds with this trait.

If your cat is a male, it may chatter, making a loud noise as if howling, especially at night, indicating its need to find a mate.

The obvious reason why do cats chatter in such a sweet way is that they feel good. Your cat may sing when it sees you walk in the door after being away for a long time because of work, or this sound may be an invitation to play. Your cat may make this sound if it is playing quietly outside under the house’s window. If your cat has a mother, the mother makes this sound when playing with its little ones.

It is a type of chatter that cats make with their mouth closed, and this sound is usually low and regular.

If your cat has a mother, you will hear it purr while feeding. Your cat may purr when it communicates with other cats or humans. But there are non-fun reasons to clarify why do cats chatter in a purring way, such as when they are in pain, during childbirth, or are about to die.

#17 Other Reasons Explain Why Do Cats Chatter

If your cat makes these sounds, she may want to be alone. Your cat may also babble to warn you that she is in distress because she asks for your help. Your cat may chatter when you arrive home, as if she welcomes you, expressing its happiness at your arrival.

There are many reasons explain why do cats chatter, and there is a wide range of different sounds that cats make. This chatter is normal behavior for them, as we discovered today. And you should not be worried by your cat’s chatter, even if you find it strange behavior.

But do not forget to cuddle your cat while watching TV if you feel that she is frustrated, and try to keep your cat away from everything that may cause her stress or danger.

😻😻 Enjoyed Reading This Article About Why Do Cats Chatter!